From Woozalia
Jump to navigation Jump to search

As "The Cheap Imitation" (my original artist name, since I was a "cheap imitation" of a real band), I put together a cassette release in 1990 titled Not Ready Yet because it wasn't finished the way I wanted it.

I left a handful of manually-copied cassettes in one record store in Athens (probably in 1992), and sold exactly zero copies. 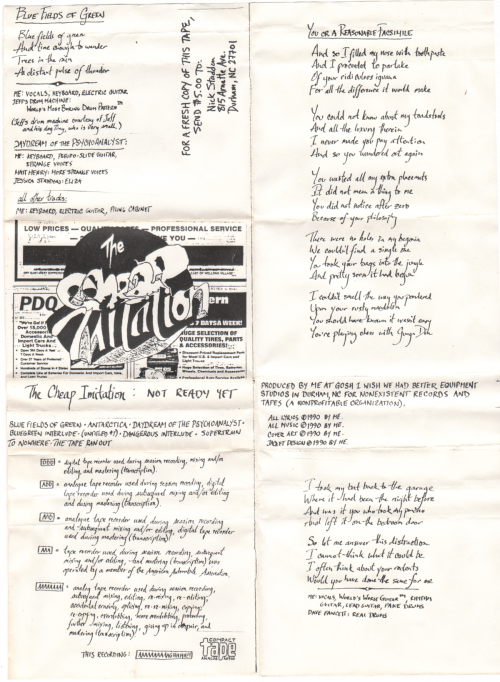 Here's the inner sleeve from the Cheap Imitation cassette, with the what-I-had-available track lineup. I put it together with a size-reducing photocopier, which was new and cool at the time.

Here's what I more or less originally wanted it to be:

There would have been smooth transitions between most of the songs. For example: after the last line of YBC ("You will speak at the tone"), I was going to have a telephone answering machine beep and then "And now, the Penguin Song" would be in a telephone-voice.

I had to compromise with my original idea for it because not all the tracks were ready, so this is what actually ended up on the cassette: