So there was this, which we watched a couple of months ago on DVD. In the beginning we're introduced to the love interest as a child, and it seemed plain to me that we were fully expected to become quite enamored of her, and to look forward to what she was going to be like as an adult... and then, in a silent montage, they zoom forward through adulthood, middle age, old age... and by five or ten minutes into the film, they've killed her off.

I had a curious delayed reaction to this. I felt like the ground had just dropped out from under me -- what was the point of having the rest of the film after that? -- but continued watching it...

...and then afterwards just absolutely collapsed in a heap on the couch and didn't feel right for the rest of the evening (which fortunately was only a few hours).

It was just like when they found Jenny's skeleton – the movie had clearly retriggered a sharp memory of that feeling: "oh, so that's the end, then. There's absolutely no point to anything after this." A sort of calmness, really; there's nothing to be saved, no possibility of rescue, nothing that needs doing now. It's just over. Pack up your life and go home.

Then today we watched an episode of R.O.D. in which the three sisters have to move, and the youngest (age 10 or so) has to say goodbye to her classmates, and that set off another (albeit less intense) reaction. 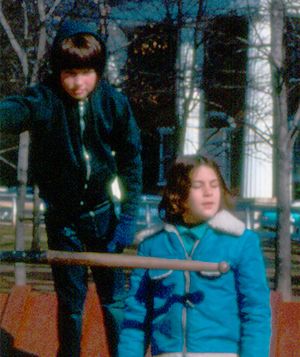 I feel like I used to have friends, maybe, in kindergarten. There was Selah and Amy and Sylvia and Oren and Elizabeth (who was sometimes mean, but only impulsively)... and parents would get us together for the occasional birthday party or movie or other kid-oriented event. I remember being in a station-wagon with a passel of other kids all singing "pizza, the good old rain" to Carly Simon's "These Are the Good Old Days" because we didnt know what the real words were....

...and then the parental units decided I needed a more "academically rigorous" environment, so I was sent to Durham Academy for 2nd grade (over my faint protests).

Coincidentally, we were at a Chinese buffet earlier this week when this family – kids, parents, grandparents – came in, all looking like they were on their way to golf and/or tennis lessons... and they just reminded me so much of how DA was. The boy had this carefully-groomed casual-but-guarded future-leader look to him, and the girl seemed like a decorated shell of a person. I imagined her soul lurking somewhere deep inside, careful not to move too much lest someone notice that it hadn't yet been eradicated.

DA was like this: Every social interaction, it seemed, started with the assumed question "are you going to enhance or lower my status if I associate with you". (If "you" was me, the answer was "lower".) Lower-people had to be put down, if you didn't want their negative status to rub off on you. Anything was a valid excuse. You're wearing an uncool brand of shoes. Your pants are a bit short. You talk about dorky things. Even the few kids I had known from kindergarten (Sunita and Jessie, maybe others) suddenly turned unfriendly.

I was there for six years (skipping 3rd grade when I was at the public (government) school in England, where social status worked very differently, so nobody particularly hated me for that and only some of the class hated me for being American (I think that was a local thing)).

Somewhere around 8th grade there was Lucy Whitfield and her younger brother Charles, who were the children of a visiting prof from England; we made silly recordings together... but then they had to go back home when the sabbatical was over. I hadn't yet figured out how to be myself in letters, so keeping in touch wasn't really an option.

And then I somehow persuaded parents to let me escape DA and go to CFS, which was a much less status-conscious kind of place. Nothing much happened in 9th grade, but then Jenny happened in 10th grade and then two years later she was gone and my life was over, only I managed to escape its utter ending (or perhaps quickly write a sequel, however poorly conceived) by following Tigger (to whom Jenny had encouraged me to write) off to college... but that's a whole other story....

When I first arrived at CFS, Sylvia and Selah were both there; Selah left after that year and Amy showed up a couple of years later[1] -- but they already had their own people to talk with, and I didn't get re-included (although to be fair I wasn't exactly excluded or shunned either; just as DA tacitly encouraged social climbing, CFS overtly encouraged inclusion and discouraged elitism, even if they didn't always do it very well). Selah and Amy in their teenage instars looked more or less as I would have expected, but Sylvia[2] had bloomed into this brilliant, gorgeous, sharp-featured, long-haired (she had a sort of boyish cut in preschool) piano-playing creature whom I constantly envied[3] but who barely seemed to know me (while not actually being unfriendly [edit: Sylvia, if you're reading this...[4]]).

And then I left school. Just to have a complete History of Friendships, I should summarize the next 35 years:

(There were a few male people in all this. I'm giving them short shrift for now.)

...and, getting back to the present moment: no, I wasn't anywhere near as devastated after watching the R.O.D. episode as I was after Up, but it did stir things up a bit (like that's hard to do) and make me wonder: why the fuck don't I have any friends left over? What did I do wrong? Why don't I matter?

Or is it the case that I never really had any – the people I liked in kindergarten don't seem to remember me with anything near the degree of fondness with which I remember them. Being friends at 6 doesn't make you still friends at 14, apparently; it has a limited shelf-life, and can't be (or isn't worth being) revived. Or maybe I just wasn't very lovable. Or maybe DA made me too paranoid to relax around anyone at CFS (Jenny being the one who somehow managed to break through that). Or maybe the gender stuff (which of course I hadn't even slightly sorted out by then) just made it difficult to interact. I don't know.

Sylvia married and moved to Raleigh. I only know this much because of Facebook. I have no idea what she does now.

Amy is a locally-renowned chef and owns three food-related businesses (a restaurant, a bakery, and a catering service); I sometimes do computer repair work for her and her mom. I get the sense that a bit of fondness may have resurfaced (after a rather rocky period when it felt like they were blaming me for things not working right), but she's a much more focused and determined person than I am; we don't really have a lot to talk about, and we're long past any social opportunities to strike up a confidence. (Not to mention that she appears happily married, and therefore probably has all the confidences she needs in her life.... and while the business relationship provides social opportunities that simply wouldn't have happened otherwise, it also gets in the way of much of anything further.)

I haven't been able to track down Selah at all. My dad knows her dad, but apparently he has gone from being eccentric to downright misanthropic and is difficult for even my dad to talk to. I encountered him in a restaurant a couple of years ago, and he commented on how old I looked (which, oddly, didn't actually bother me).

...and the point of all this, perhaps: I clearly remember that on my 6th birthday, I had decided I didn't want to turn six, because I could sense on some level that things weren't going right and I just wasn't ready.

I think I might be ready to turn six now. Nothing older, mind you; just six. I think I might have some idea of how to not screw up so badly this time.