From Woozalia
< Writing‎ | drafts
Jump to navigation Jump to search 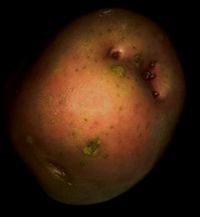 This is my home. We call it “the potato”.

Actually... this is just a picture of a potato. We worked out that it's probably a bad idea to show images of our actual home to, generally speaking, anyone who doesn't live here. And actually, this particular potato doesn't really look that much like our home base; I don’t want us to get doxed. My strong intuition is that you wouldn't be careless, but we need more certainty than that. Maybe soon.

Suffice it to say that it does really look kind of like a potato; hence the name.

But it’s not even really this color or shape. (Sorry. I wish I could show it to you for real.)

I can tell you how we live, though. That doesn't show up in astronomical photos.

We have all the best places. I mean, really, the best. Nobody in the moneyverse is doing this kind of work because there’s no "market" for it. I’m not quite sure how to explain how qualitatively different it is from what you’re probably used to...

Okay, start with the superficial: no pop-up ads.

I mean, yeah, you can get notifs pushed to you that way if you want, but there’s no pressure. Most people have specific places where they go to take care of tedia, if they have any.

On a deeper level: the code is all open-box.

There’s a lot of pressure from outside orgs to accept "limited" amounts of lock-box packages – someone is obviously paying a lot of marketing PhDs to come up with new emopeals – strongarms, guilting, bribes, gaslighting (we get the carrot and the stick and everything in between) – but apparently they haven't yet noticed how completely that sort of manip doesn’t work on us.

Or maybe they have, and don’t really care; in their frame, we’re a pretty small "market".

Or maybe they do care, and are working on something more dangerous. That’s what sometimes keeps me up at night. Ultimately, that's why we’ve contacted you.

...but that's a bit of a side-fork. (Linear narratives are hard for me sometimes, but I want to make sure you understand.) The point is that we control what we live in, because we want it to be a place for enjoyment and discovery and healing and creativity and memory. We've learned by hard experience.