When I was very little, the predominating idea about gender seemed to be that gender is not only innate, but tied inextricably to biology while also being a social obligation. If you look like a boy, you not only are a boy, you also must behave like a boy or you are somehow being irresponsible.

I had also been told that "little boys are savage beasts" – and personal observation of the boys around me seemed to confirm this.

Given that I liked playing with girls rather than boys, I came to the conclusion that I must somehow be in possession of unusually good self-control – but also that some day this control might slip, and my true inner boy-nature would come out, and then I wouldn't be allowed to play with girls anymore.

Some years later, another hypothesis about gender came along: the idea that gender is almost entirely socialized, i.e. taught by society rather than being innate.[1]

(My understanding is that this hypothesis was largely advanced within the medical community in the late 1960s by a psychologist named John Money.)

I immediately embraced this view because it seemed much more liberating and reasonable than the old "biology defines obligatory social role" view, both for myself and my handful of tomboyish friends. If gender norms are mostly learned, the logic seemed to say, then why does it matter? There's nothing "unnatural" about violating norms, because the norms are all artificial to begin with. 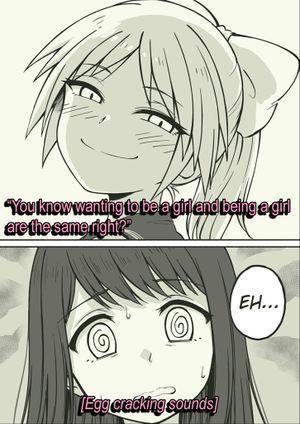 Wanting to be a girl kinda means you are one (at least inside, depending on how you define gender).

(I'll just mention in passing that both this argument and the "biology=obligation" argument it replaced are based on an appeal to nature – the fallacious belief that what is natural defines what is good. The biology=obligation argument is also based on a fallacious assumption that behavior which deviates from observed norms is somehow unnatural. ...but I digress.)

Although it was more liberating in that it allowed me to violate gender norms, it still posed a problem: if gender is entirely socialized, then why did I want to be a girl? What does it mean to "be a different gender" from how you appear when you only acquire gender from what other people tell you and teach you? How can you have learned something so completely different from what you were taught?

That was the paradox which prevented me from realizing that yes, that is how I felt.

Throughout the 1970s, 1980s, and 1990s, more and more evidence came in about gender-related behavior, and it became plain that neither of the first two hypotheses were correct. It may in fact be true for many people that they really don't care what gender they're perceived as or which body-format they're in, and therefore choose to follow social convention and are effectively socialized into their gender-roles, but one thing which is definitely clear is that there are a large number of people who care very much, and some of them are in bodies (and were consequently assigned social roles) that do not match their gender identity – which causes them to experience distress which can literally be too much to bear. (It certainly came very close for me.)

I only found out about this revised (v3) hypothesis in 2000, and all the pieces suddenly clicked into place.