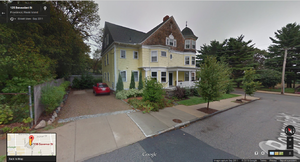 The picture at right is 130 Benevolent Street (aka 138 Governor Street), Providence, Rhode Island – from a September 2011 Google Street View. It's the first place I lived when I moved to Prov in 1985, following Tigger to college at Brown.

At the time, it was a possibly-illegal[1] boarding-house sort of thing, with approximately one apartment per room, run by some guy named Irwin Greenberg. The driveway was old tarmac, and more extensive than shown here -- it wrapped around the front a little way past the front porch, and cars were parked all over it. You had to be careful not to get blocked in. I tended to walk everywhere, but when I needed a car I needed one... so I usually ended up in front, just barely off the curb -- as seen in this photo.

The small oval window you can see just above the porch was stained glass; the landlord's teenage nephew broke it during some sort of hijinks in which he had gotten locked out on the porch roof by someone -- so naturally he needed to break a window to get back in, rather than trying to climb down or ask someone nicely to please let him in... he was a problem-child, apparently... oddly enough, despite being this big, scary, muscle-guy, he was always nice to me... or at least after that one time when he broke in and stole all my CDs, which the landlord was able to recover somehow. It was like... he was kind of a sociopath, but at the same time he wanted someone to like him, and I was one of the few people who didn't ostracize him in some way. Or something. I may be overextrapolating.

There was no mail pick-up; you had to take your mail to a drop-off box. (Mail used to be kind of important.) I seem to recall the nearest one being some blocks away. Incoming mail was left in a tiny little box on the porch and then someone would dump it on a table in the front hallway, on top of the previous days of mail, unsorted. I made a cardboard mail-sorting thing, labeled for each apartment, so I could at least go through the mail and make sure I wasn't missing anything. Occasionally other people would sort the mail too. (I have a vague memory that at some point the Brown Psych Department, where I worked, tossed out a proper mail-sorting shelf, so I snagged it and replaced the home-made cardboard one.)

The first year I was there, I lived in the room on the first floor just to the left of the porch, with the bay window. It was a fabulous old room with wooden paneling up to a sort of ledge, a glass-door recessed wall cabinet, and other Victorian features I don't remember. The house in general had both a main staircase (leading off the official Governor St. front door, which was sealed shut) and "servant stairs". which were small and twisty and totally a trip back in time. (Significantly further than this one, even.)

The room was infested with cockroaches, as was the house in general. I woke up one morning thinking that a segment of my digital alarm clock had burned out, until I noticed it was moving -- at which point I realized there was a cockroach inside.

After that, I worked out a way to suspend it with string so the roaches couldn't get in. That was the same clock radio on which I first heard the announcement of the Challenger disaster. I still have it, and it still works... and how's that for serious industrial-strength Genuine Old Fogey-Style Rambling? Kids these days don't know how to ramble properly; now get off my lawn.... which used to be part of the parking lot, did I mention that? >.>

I started putting packing tape at strategic places around the furniture, sticky-side-out, to keep the roaches from getting up onto tables, into the fridge, etc. This gradually turned into the most amazing collection of gradually-expiring cockroaches one could ever hope to acquire.

The landlord later fumigated the place; I actually don't remember the roaches being a problem after that, so it must have worked.

None of the apartments had their own bathrooms, as far as I know -- certainly neither of mine did. (I think maybe the basement apartment did.) There was a shared bathroom on each floor. There was also an ancient lady with some sort of Eastern European accent who was a hoarder and would remove any toilet paper you might leave there, even if it was properly installed on the dispenser. (At first I thought it was just people being mean/selfish -- but then someone told me about the Crazy Lady.) Being obstinate, I used some stiff plastic-coated wire to lock the toilet paper in so it couldn't easily be removed, which seemed to work; go me.

There was also a fairly sweet but alcoholic and obviously[2] somewhat developmentally disabled guy named Larry living there. I remember the Crazy Lady yelling at Larry outside in the hall, in her odd accent: "You DEESAPPEEYA!" The Crazy Lady and her imagined history became a sort of in-joke between Tigger and me... the details of which I can't remember at the moment[3], and of course Tigger isn't available for comment (my Ouija board is in the shop).

The second year I was there, I graduated to a room in back which actually had its own kitchen (...and a carpet that turned out to have mounds of weird sticky dusty stuff under it, once I removed it). Unfortunately it also backs onto a sort of driveway-alley, and the one time I left a window open (because of a cat that had come in, and I didn't want it to be trapped) while I went out, someone broke in and took all of my CDs and several pieces of recording equipment -- including a mic I had purchased for $35 that had a particularly nifty tone to it [technical details omitted for the sake of not straying ridiculously far off-topic] and which I haven't been able to replace since then.

I'm trying to remember which particular musical recordings I made while I was there... the only one I'm sure of isn't one that I've posted online yet. It was kind of cramped, but I did manage to set up all the audio gear. It was almost a ritual, like a christening or housewarming: I didn't feel properly moved-in to a place until I had the record player, cassette player, and (later) CD player all hooked up... so I could listen to music while hooking up the 4-track RtR deck and shelving books.

In the spring or summer of 1987, I had an opportunity to rent two floors of another house and live with a bunch of friends, which had already been an ambition of mine for several years, so I moved to 9 Amy Street... and I'll post about that separately.