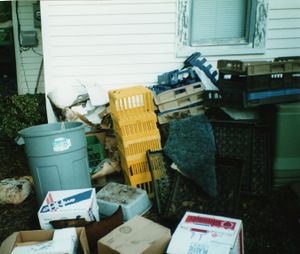 After getting back to Durham, I realized a couple of important items had been left behind: a pair of enormous speakers and the (in-need-of-repair) Quantum mixing console. I couldn't get down to Athens again before the end of the week, when Neff said they would be emptying out the trailer to rent to someone else, so I found a "labor for hire" place and hired them to go retrieve those three items. There wasn't time to mail them a lock key, so I called a locksmith to go out and break the lock. (Josh ultimately destroyed the speakers, but I still have the mixing board.)

Later, we got a trailer hitch for Harena's minivan and would drag a U-Haul trailer down to Athens and back as time permitted, emptying out the storage unit one load at a time. I think we usually did those as a round trip, though I also remember staying at a particular place (what then!Benjamin called "the Greenbird Motel") with H's kids on multiple occasions.

It was only much later that I realized I had also left my IBM CS-9000 in the trailer (long-gone by then) as well.